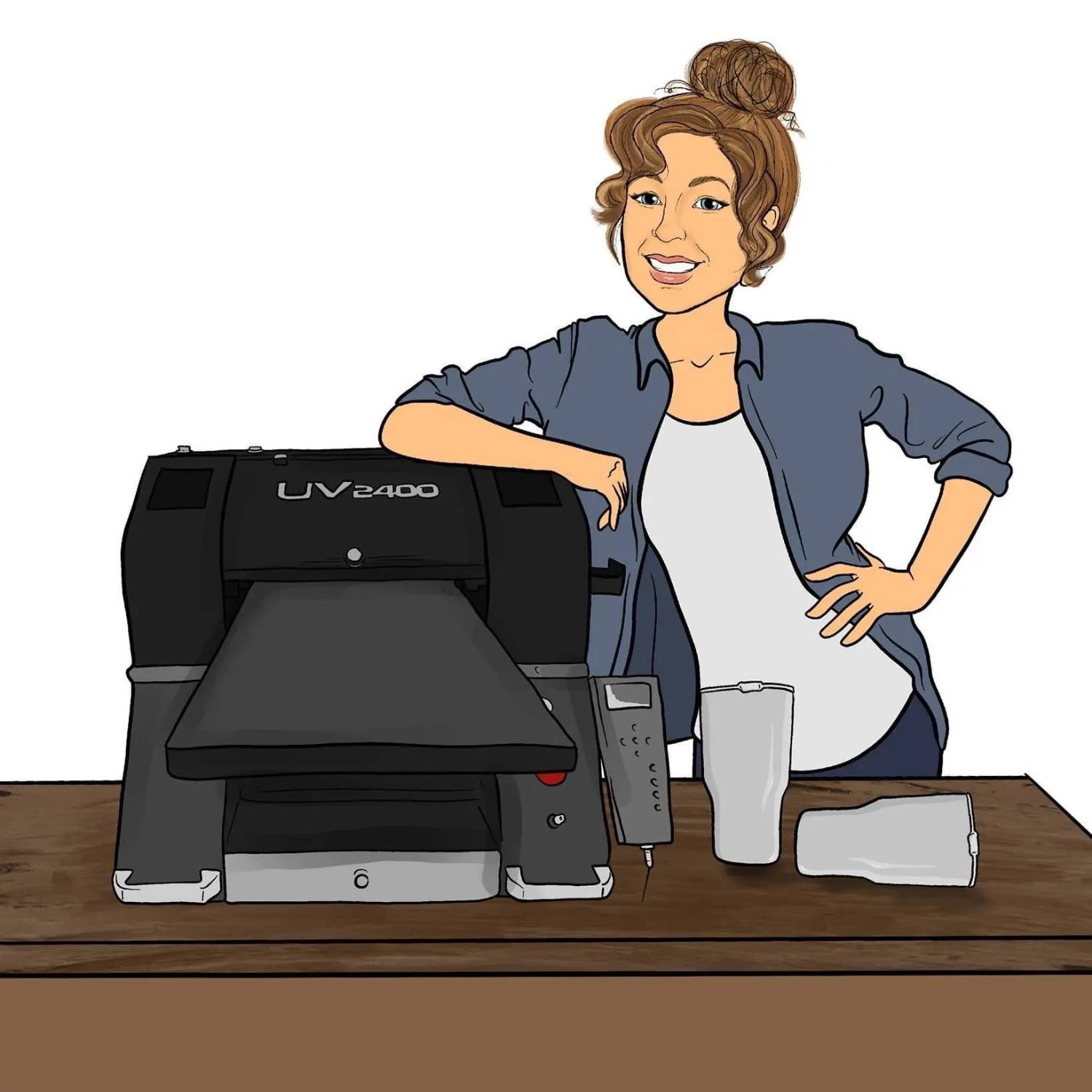 When her kids went to college, Celeste Powers decided it was time to start doing the many crafts she had envisioned through the years. She bypassed quilted toaster covers and delved into powder coating. As her designs began to become more intricate, others took notice.

From her home in rural Coldwater, Mississippi, Powers began to build a name for herself and decided to attend an awards and presentation show in Las Vegas with friends she had made in the world of crafting.

At the show in Las Vegas, she saw her first UV printer. She saw other printers, but when she saw the LogoJET printer and met LogoJET’s CEO, Susan Cox, something clicked.

The whole trip home, Powers was imagining the many ways she could create using the UV printer. Once home, she did more research and decided to take the plunge and order a LogoJET printer.

“I’m not the typical print-industry person,” she said. “When my wheels started spinning with all the home décor, I’m not sure Susan or the rest of the LogoJET team knew where we would take it!” 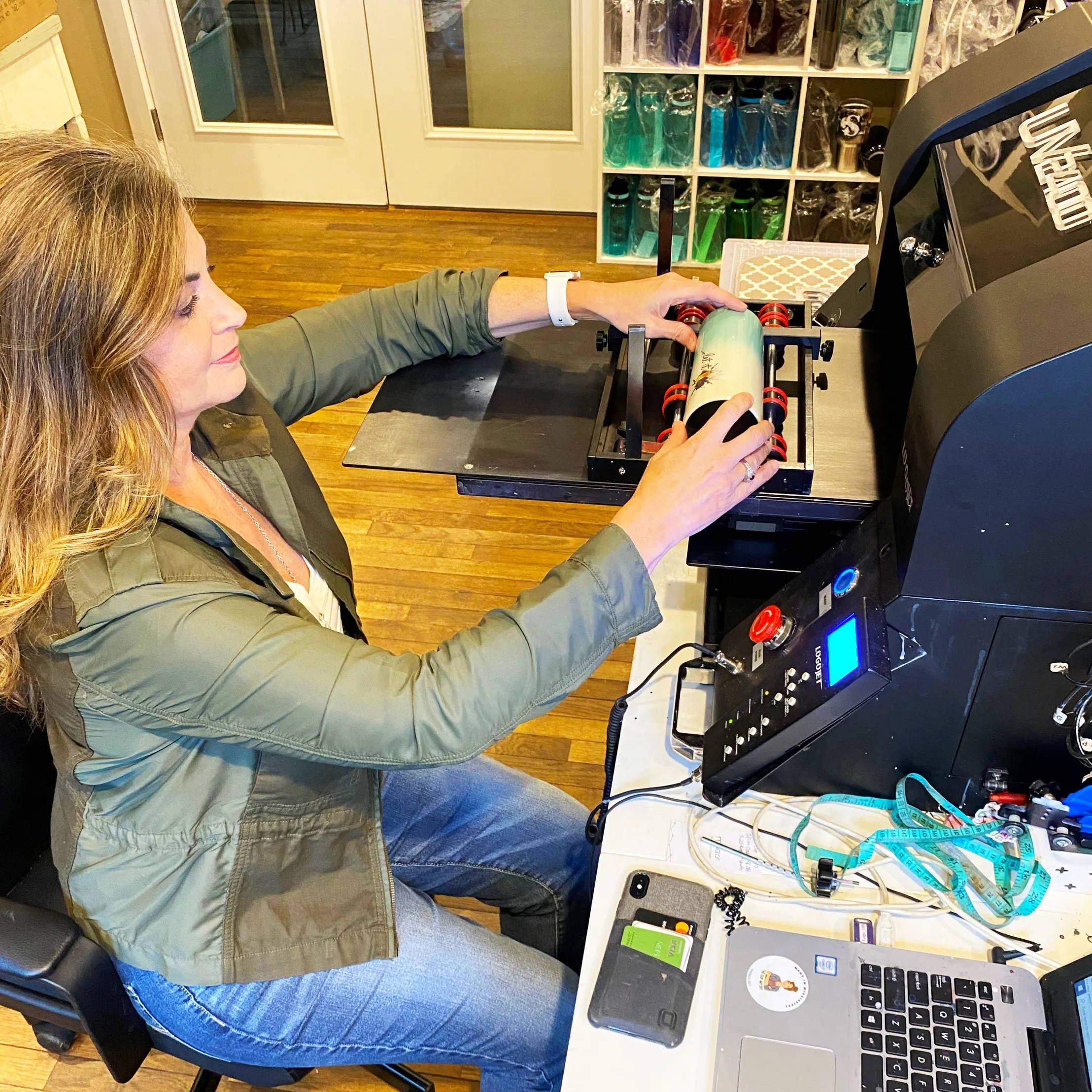 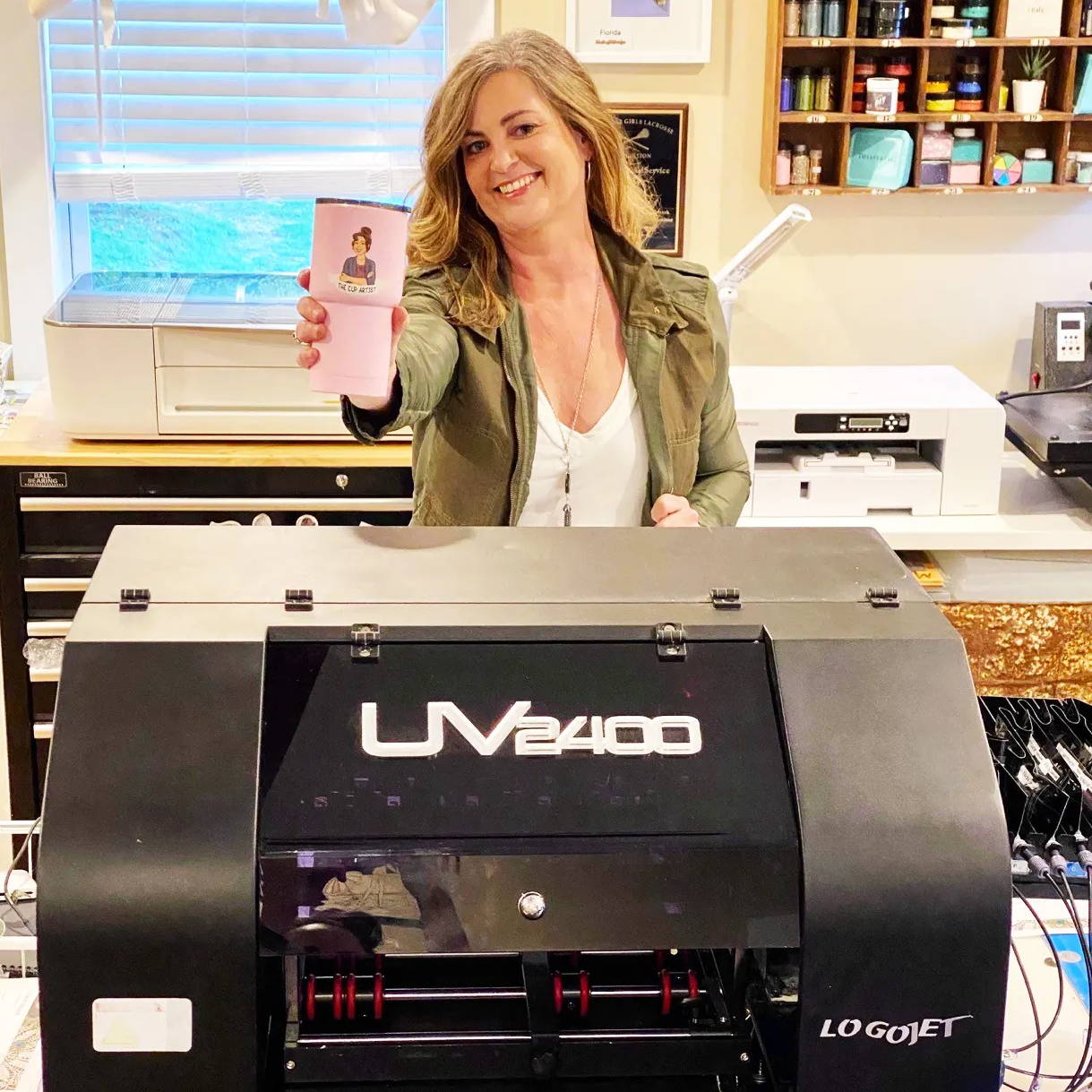 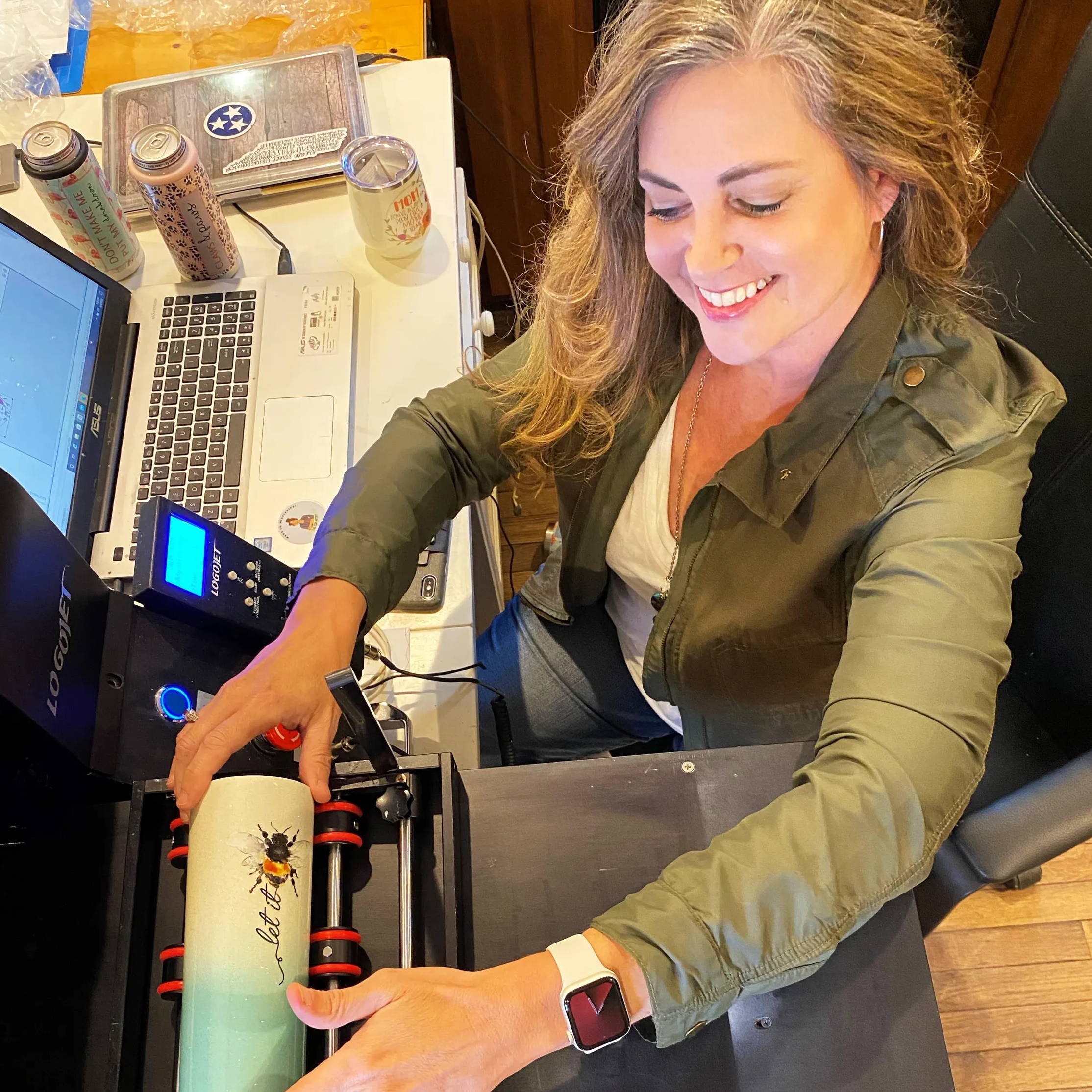 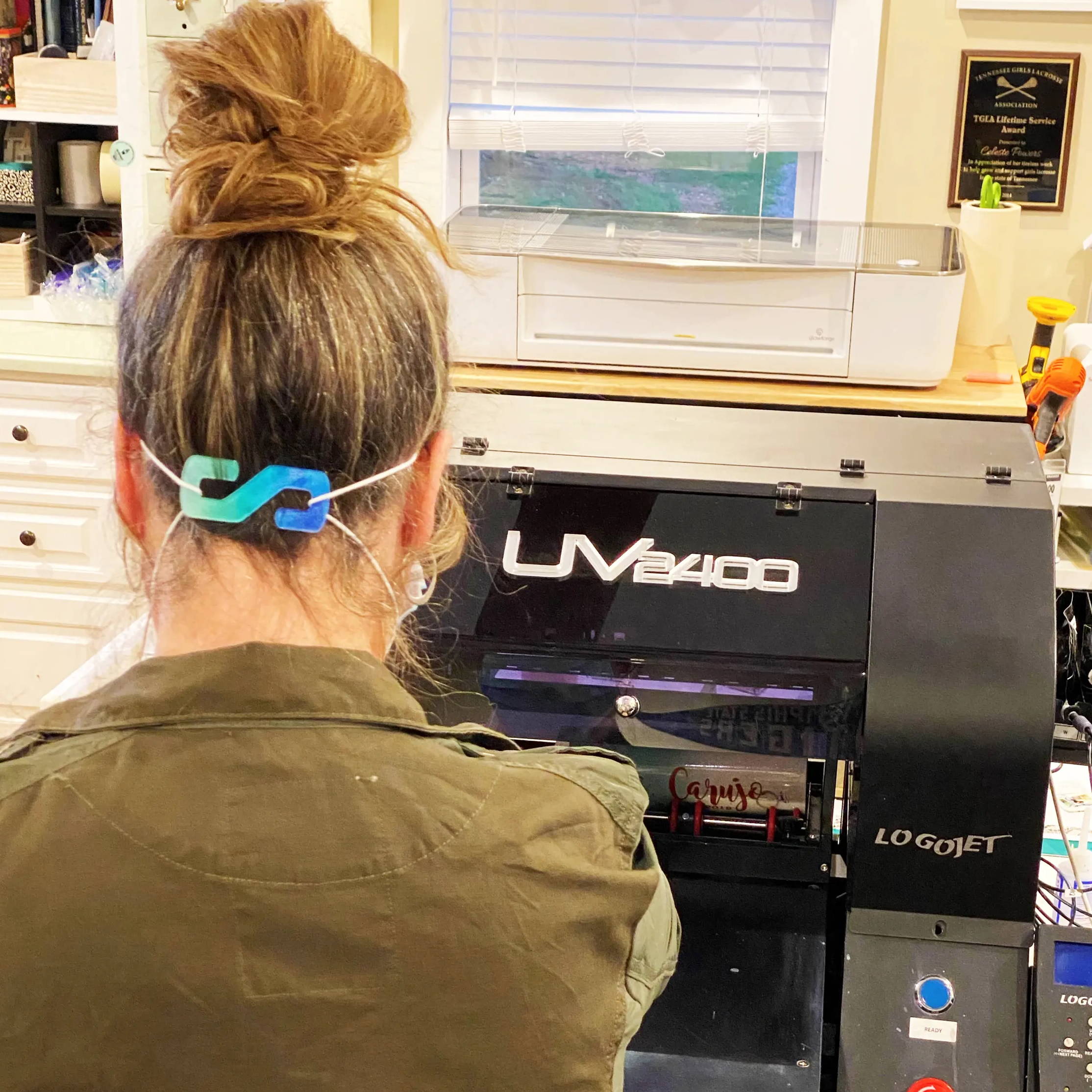 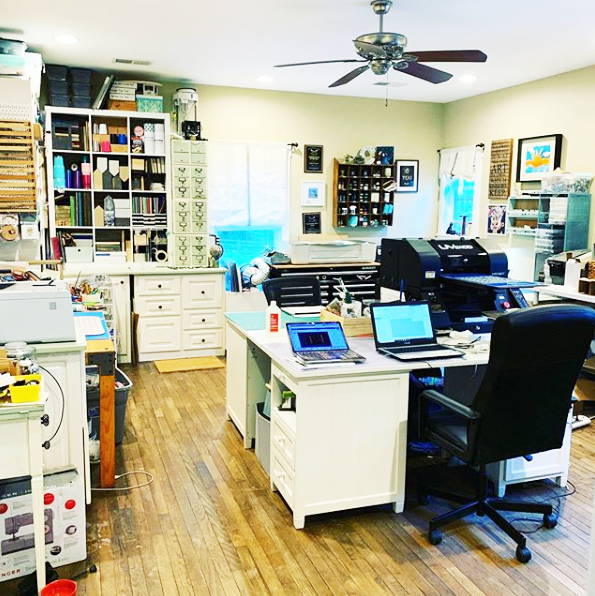 Five years later, Powers says her initial instinct about the LogoJET printer and team was right.

“We’ve done incredible things with the printer — and we’ve created such a variety of things. Plus, the support we get from LogoJET, is incredible,” Powers said. “Even though our printer is out of warranty now, they still treat us like we just bought the machine.”

Powers is a woman with a keen sense of humor and a lot of ideas — sometimes ideas start spinning and she can’t sleep and stays up through the night creating with her LogoJET printer.

She says she and her team don’t use the printer as she estimates 90% of the industry does — they make different items and build on trends she recognizes on the internet. She keeps notebook after notebook of ideas, from crafts to responses to current memes and other trends. For example, her hot-selling line of personalized White Claw cups demonstrate how she translates an idea and humor onto a product.

Some of her ideas hit the mark but don’t exactly work as planned — like the parody of a “Pringles can/wine cup” based on a woman on a viral video who was drinking wine from a Pringles can in Wichita falls, Texas.

“We did hear from Pringles and we stopped selling them. We apologized,” Powers said. “My husband tells me all the time that he would get lost in my head.”

Those who know Powers says she can look at something others would barely notice and be inspired to create — like when she saw an item a Southern Living food blogger posted and knew she could do it better. So, she did — and built a relationship with the blogger and was invited to the Southern Living test kitchen, where other possibilities may emerge as well.

She says for the first two years she had the machine she primarily used her LogoJET printer to print on zany, irreverent cups for her business “The Cup Artist,” available on Etsy.

Then, she bought a small laser cutter — which she combined with her superpower to spot a trend and act on it quickly, which explains how her business has actually increased during the COVID-19 pandemic.

“Being able to cut acrylic and then print on it with the LogoJET printer opened new doors to make a variety of products — like the face masks comfort clips we started making when the pandemic started,” she said.

Based on her experience in a Facebook group for UV print crafters, she sees that those who have other brand printers “just don’t get the results and response that we do with LogoJET. If I have a question or an issue, I know I can call LogoJET and they will hold my hand through it. I don’t feel like we would have gotten that from another company.”

Powers says the LogoJET UV2400 allows her and her team “to put all of our creative aspects onto something” and to do so quickly, efficiently and profitably.

For example, she does a lot of printing on woodblocks.

“A lot of crafters will sit there painting on them and using Modgepodge to transfer pictures, with a lot of drying and waiting time. They are having to wait 24-48 hours to complete a set of woodblocks,” Powers said. “We can paint the same woodblocks, wait a couple hours for them to dry and then print on them — and we’re done within minutes.” 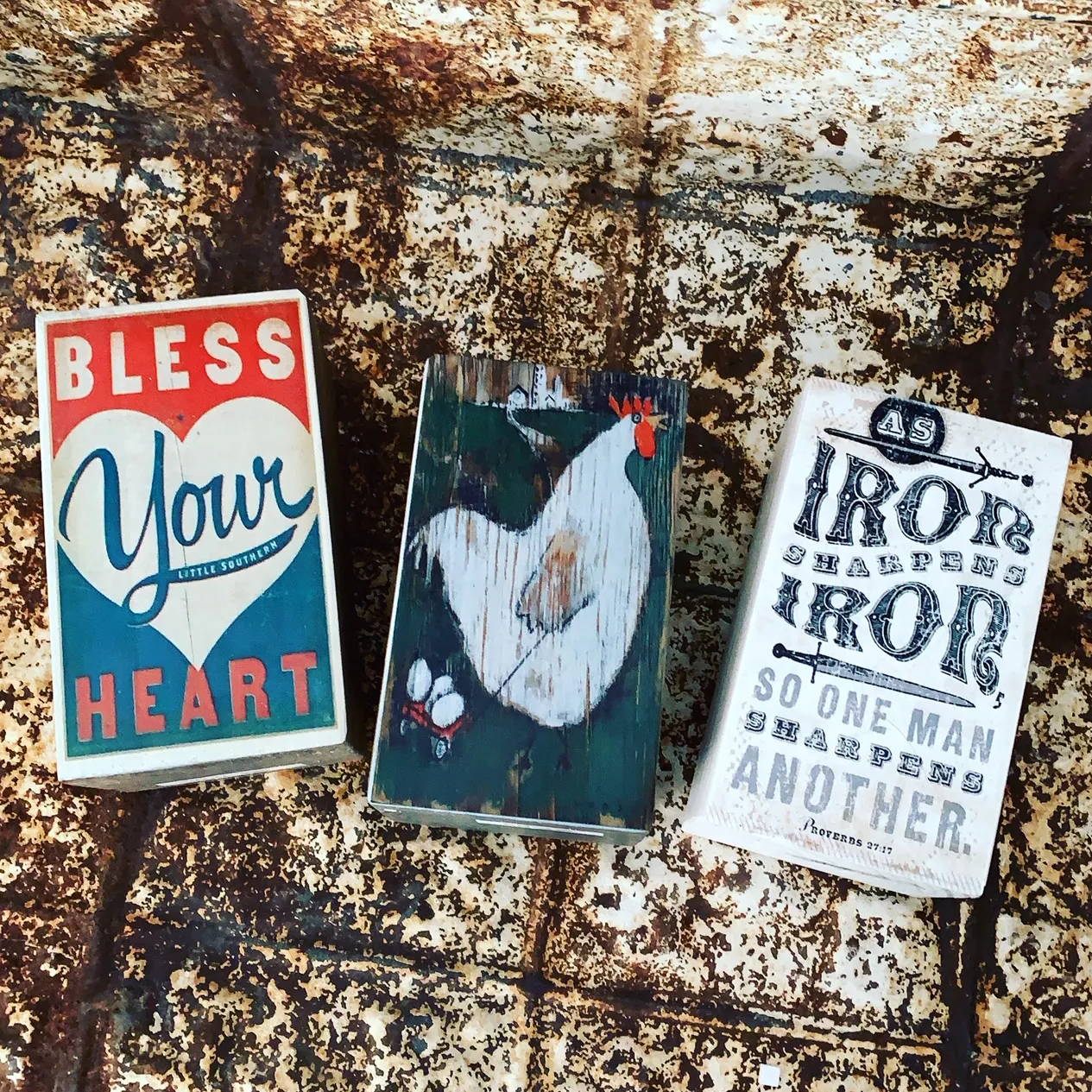 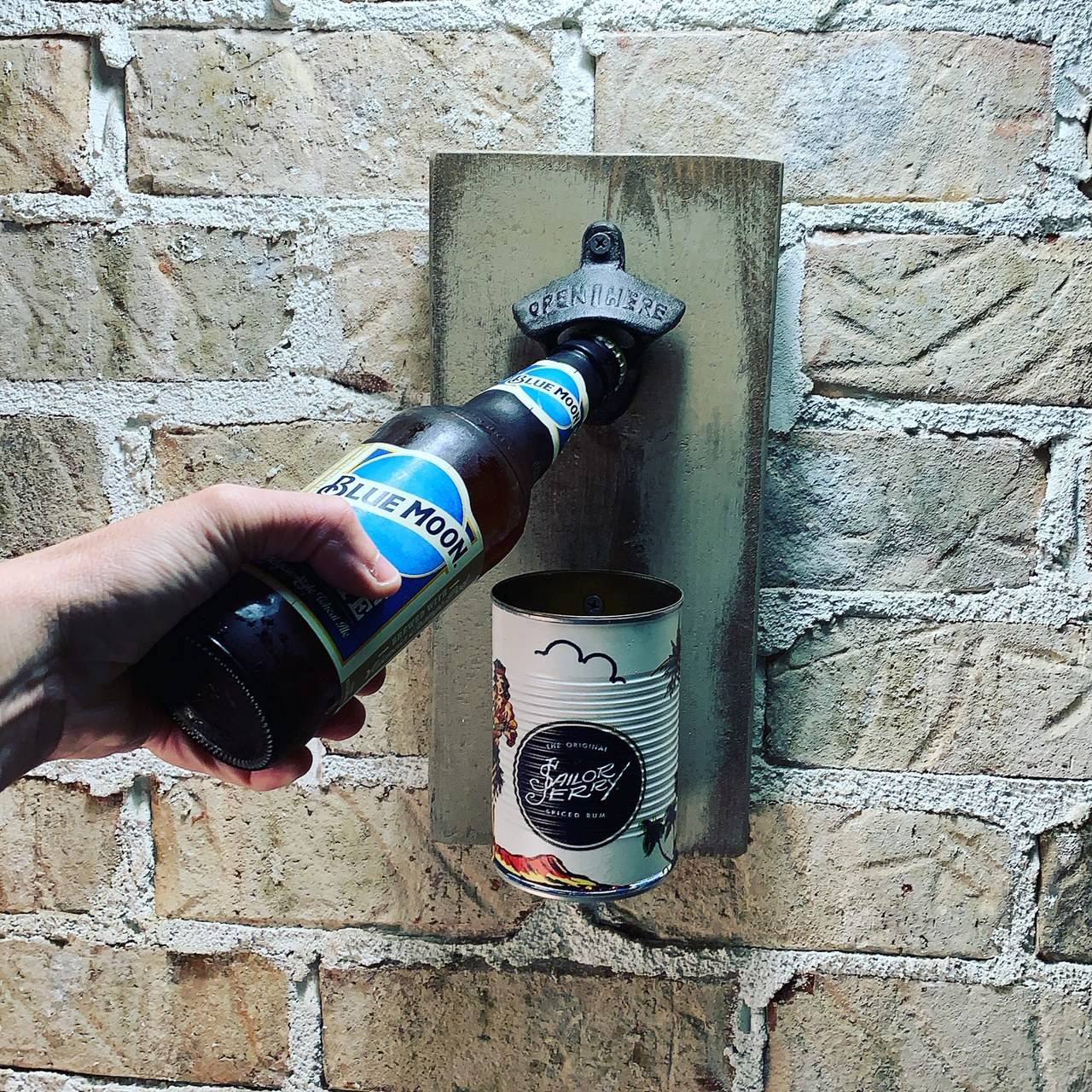 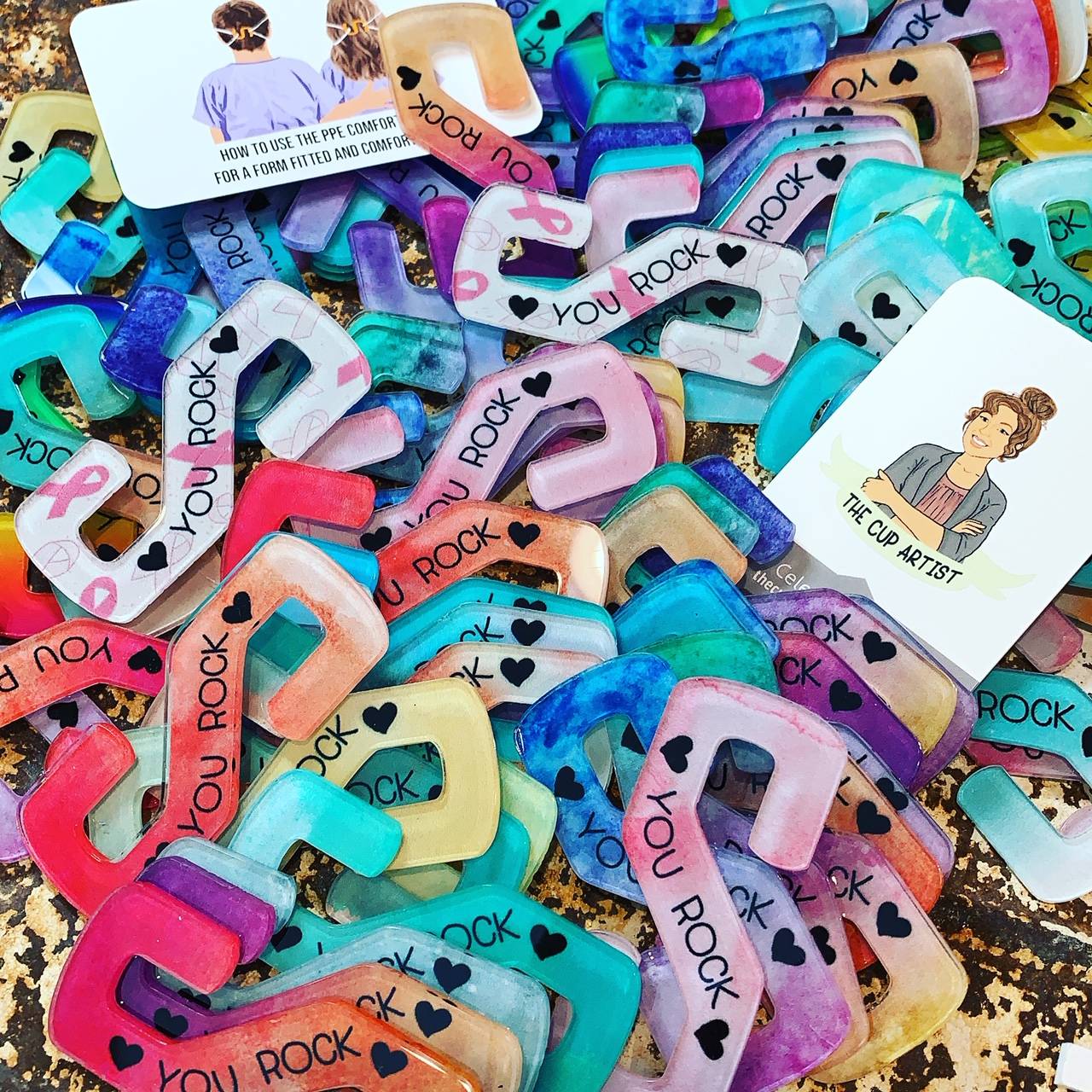 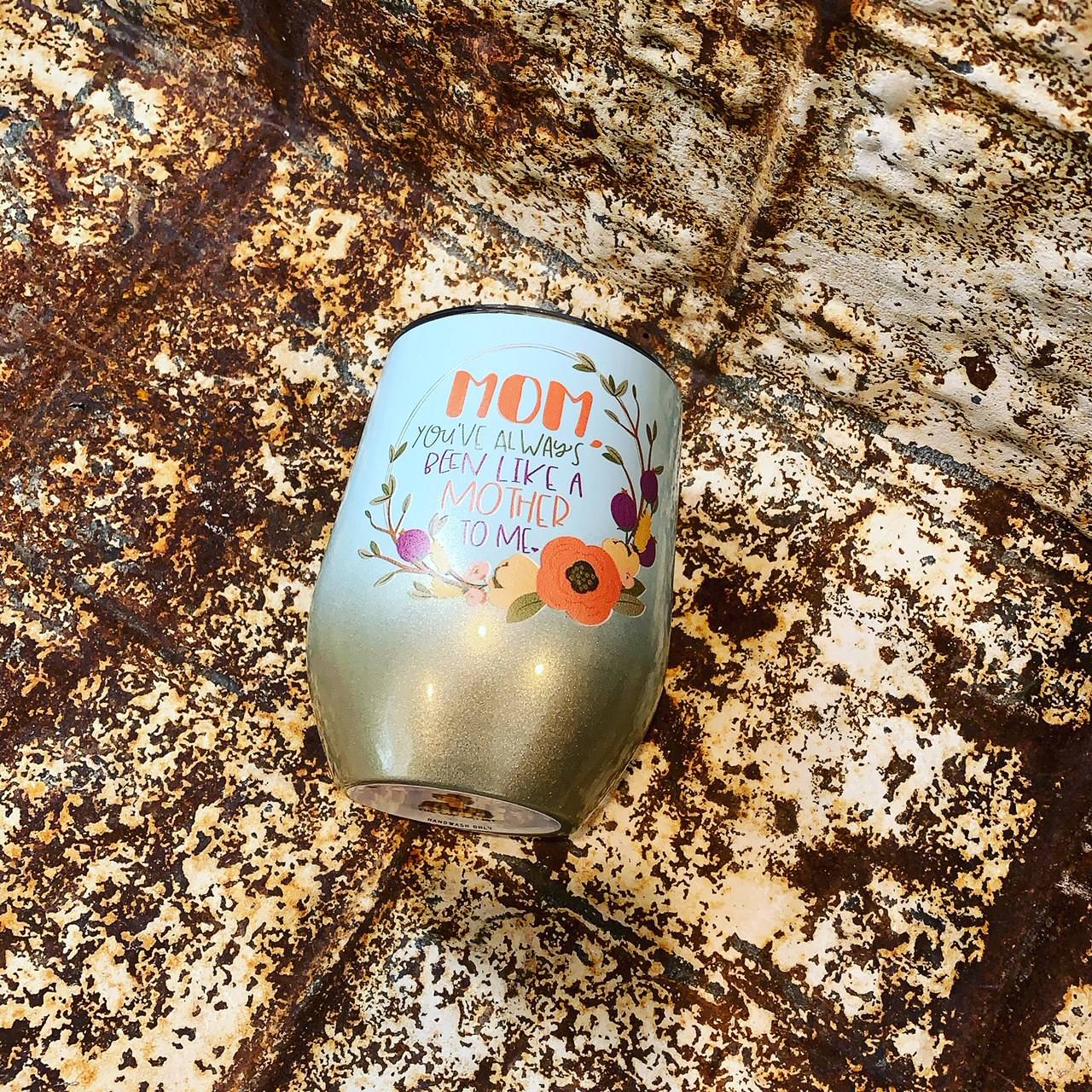 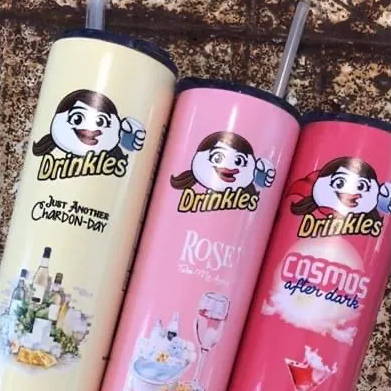 Celeste says the LogoJET printer has allowed her the ability to mass produce handcrafted-looking and quality products versus having to wait for the laborious process of a handcrafted product.

Powers has a number of contracts with a variety of promotional companies, including specialty shaving kit brushes, tumblers, awards and more. She sells her home décor items online in her Etsy shop and in regional permanent craft booths. She also makes and markets customized cake toppers, hair accessories and other crafts.

Celeste has a state-of-the-art crafting workshop with the UV printer as her center of production. I admire her volunteer work on a number of Facebook powder coating and crafters groups helping other businesses with valuable information. Her ideas and dedication to advancing the crafting industry has been very instrumental in helping this industry to experience how adding a UV printer can really grow your business.

Her success is representative of a growing number of small businesses that make up the $44 billion dollar crafting industry. LogoJET printers play a critical role to help these small businesses differentiate, compete, and succeed in a highly competitive environment. I’m proud to have and support Celeste as our customer.” Says Susan Cox, President & CEO of LogoJET.

For Powers, the possibilities are endless. She prints on plastic, metal, stainless, copper, glass, cardboard boxes and more.

“With the versatility the LogoJET machine offers, there’s just no end to the things I can create or do,” she said. “Plus, LogoJET’s customer service — you can’t beat it. And they care! Susan, the CEO, even calls every now and then just to check in and ask how things are going. You don’t get that from a Mutoh or Mimaki — or anybody else.” 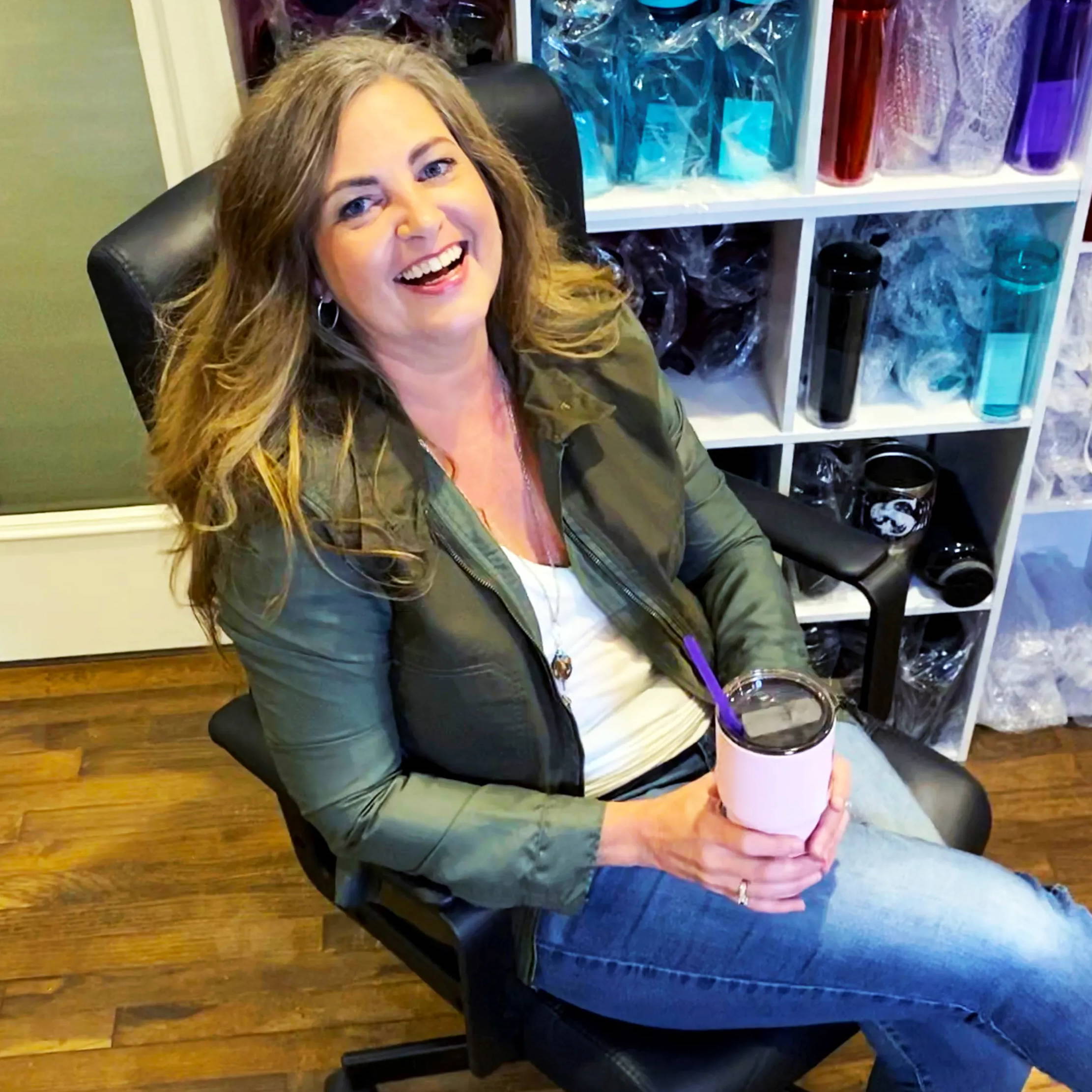 "Plus, LogoJET's customer service - you can't beat it. And they care! Susan, the CEO, even calls every now and then just to check in and ask how things are going. You don't get that from a Mutoh or Mimaki - or anybody else."

Our customers are the reason for everything we do.

Guaranteed peace of mind with every LogoJET purchase.